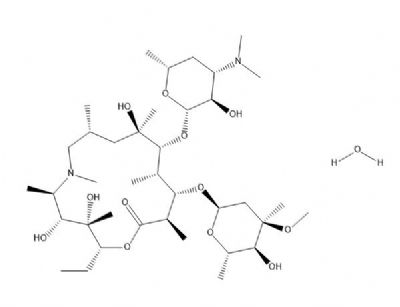 Azithromycin is an antibiotic medication used for the treatment of a number of bacterial infections. This includes middle ear infections, strep throat, pneumonia, traveler's diarrhea, and certain other intestinal infections. Along with other medications, it may also be used for malaria. It can be taken by mouth or intravenously with doses once per day.

Common side effects include nausea, vomiting, diarrhea and upset stomach. An allergic reaction, such as anaphylaxis, QT prolongation, or a type of diarrhea caused by Clostridium difficile is possible. No harm has been found with its use during pregnancy. Its safety during breastfeeding is not confirmed, but it is likely safe. Azithromycin is an azalide, a type of macrolide antibiotic. It works by decreasing the production of protein, thereby stopping bacterial growth.

Azithromycin was discovered in 1980 by the Croatian pharmaceutical company Pliva and approved for medical use under the brand name Sumamed in 1988. It is on the World Health Organization's List of Essential Medicines. The World Health Organization classifies it as critically important for human medicine. It is available as a generic medication and is sold under many trade names worldwide. In 2019, it was the 48th most commonly prescribed medication in the United States, with more than 15\u00a0million prescriptions.

Looking for a discounted price or need more info for 'Azithromycin monohydrate (CS-O-00855)' ?

Looking for a discounted price or need more info for 'Azithromycin monohydrate (CS-O-00855)' ?